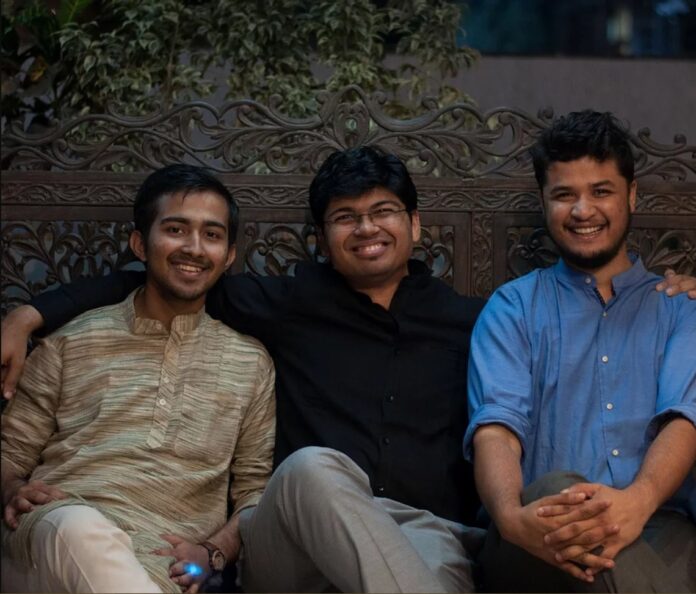 Amrutam is a wellness brand focused on sourcing pure products from farms and bringing them to our homes. The team partners with farmers around the country to source traditional agri-products.

As the modern consumer becomes woke about what they choose to eat, wear and do, they often go back to their traditional roots to seek sustainable options. Amrutam is at the forefront of facilitating this movement.

Sanyam Shah, Divyank Jain and Deep Shah planned to create a sustainable dairy business in 2015 and after two years of research, founded Amrutam Global in 2017. Wanting to help small farmers prosper, they toured the country, identified credible sources of nutrition-rich products and ultimately launched with a single product: ghee.

“It’s ironic how ghee is our bread and butter,” says Divyank Jain.

The co-founders Sanyam Shah, Divyank Jain and Deep Shah, come from diverse backgrounds. Sanyam is from a Sanskrit scholar and a Security Consultant from Mumbai, while Divyank has lived and worked across seven cities working on theatres, photography and marketing. Deep, on the other hand, is a financial markets graduate from South Mumbai’s H R College, who earlier investigated insurance frauds for a living.

The trio were college students when they were inspired to work for the common good. Amrutam hence became a social entrepreneurship venture which uses economics as a means to bring about rural happiness. They combined their expertise to create and run the Mumbai-based business.

“We are very different people: it’s the trust and respect that binds us together,” says Sanyam.

Amrutam is currently one of the leading sellers of premium pure desi cow ghee in the world. The Vedic bilona (hand-churned) method gives ghee which is casein-free and suitable for lactose intolerant individuals. Milk is first curdled into curd, resulting buttermilk is hand-churned, and the makkhan is then heated to prepare ghee.

Around 27-30 litres of milk goes in to produce 1 kg of ghee. Bilona ghee is in high demand not just in posh Tier-I localities but also in smaller towns. Pharmaceutical companies frequently lookout to use such ghee in their medicines.

Given the costs, management and effort needed, not many people venture into the traditional method of ghee preparation. They have been growing their sourcing base in Gujarat and Maharashtra. In alignment with the wellness philosophy, only A2 milk from indigenous breeds like Gir, Kankrej, Rathi, etc. is used.

Very soon, they are planning to add cold-pressed oils, organic sugar, jaggery and other wellness essentials.

Marketing played a crucial role in the growth

While home-made desi ghee has been a rage for the last generation, myths around it and the rise of butter had led people to stay away from it. The most crucial part was to educate working professionals that Desi Ghee isn’t unhealthy. Celebrities like Shilpa Shetty and Rujuta Diwekar have been vocal about generous use of ghee, and Kareena Kapoor Khan’s pregnancy diet further increased the demand.

Along with highlighting the nutritional benefits, Amrutam shared a lot of content around nostalgia, current affairs and the relevance of ghee in our diet today. Internet users particularly loved and engaged with their recipes and beauty tips. They’ve never had to sell ghee, but a lifestyle alternative: which the market accepted and adopted.The marketing content has been created by The Wise Idiot, a sister concern since inception.

“Whether it is Kashmir or Tripura, Madrid or Hong Kong, the demand for pure ghee is rising. Marketing helps you reach the people that are eagerly waiting to pay you.”

Ghee is a staple ingredient in the Indian diet. There’s immense demand amongst NRIs, second-generation Indian diaspora. Thanks to the power of the internet, families from North America, Dubai, Europe, South East Asia, Australia, and Eastern Africa.

Whenever they fly down to India, they carry a large quantity of ghee back with them. Similarly, their families here often purchase ghee with other food items to ship it with them. “The most interesting customer we’ve had is from North Carolina. A caucasian male, he adopted Hinduism after coming in contact with ISCKON and leads a minimal, agrarian life in North Carolina. He has consistently bought large quantities for the consumption of his community,” says Sanyam.

Collaborating with the Competition

Gowardhan, Patanjali, Amul are common brands found in all homes. However, they aren’t competitors for Amrutam since none of them serves hand-churned A2 cow ghee.

Amazon, Flipkart and many organic platforms too, are filled with ghee sellers. However, given the marketing, scale and communication of Amrutam, it has consistently come out in the lead.

There are plenty of gaushalas and small farms trying to sell their products online. Instead of competing with them, Amrutam wants to welcome them so that everyone can grow together.

“Amul has gotten the model right, and there is immense value in following it,” says Deep. Instead of getting into agricultural production, Amrutam wants to grow by bringing more farmers in the community, buying local, and distributing it throughout the world.

“Amrutam has been growing by 300% in revenues over the last 3 years and targets to clock 10x growth in the coming 2 years.”

As the awareness and willingness to eat healthy and cruelty-free increases, Amrutam will continue growing and contributing to rural prosperity.

Chaiops: This tea brand is brewing up a success story, making each sip unforgettable.

Doggobits: With this natural and nutritious dog food brand, we ensure that your dog’s health and happiness is in the best hands.

Big Food Co. – Hosting a party? This cloud kitchen will deliver an unforgettable feast at your doorstep.

Enhance your look with Orafa’s gorgeous collection of fashion jewelry at...

The Business Press Editor - December 4, 2022 0
People come and go, but jewelry is forever. Amidst the uncertainties of life, it's reassuring to know your favorite piece of jewelry...

THE BATH BABES – This handmade luxurious bathing brand, is making...

House of SAZ- This woman entrepreneur’s brand is encouraging everyone to...

Castle Design- This interior designer is creating waves in the interior...

Logicloop- How this digital agency is pushing the envelope and helping...